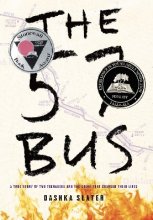 One teenager in a skirt.
One teenager with a lighter.
One moment that changes both of their lives forever.

If it weren’t for the 57 bus, Sasha and Richard never would have met. Both were high school students from Oakland, California, one of the most diverse cities in the country, but they inhabited different worlds. Sasha, a white teen, lived in the middle-class foothills and attended a small private school. Richard, a black teen, lived in the crime-plagued flatlands and attended a large public one. Each day, their paths overlapped for a mere eight minutes. But one afternoon on the bus ride home from school, a single reckless act left Sasha severely burned, and Richard charged with two hate crimes and facing life imprisonment.

The 57 Bus is Dashka Slater's true account of the case that garnered international attention and thrust both teenagers into the spotlight.

I Am Not Your Perfect Mexican Daughter Cover.jpg

I Am Not Your Perfect Mexican Daughter

But Julia is not your perfect Mexican daughter. That was Olga’s role.

Then a tragic accident on the busiest street in Chicago leaves Olga dead and Julia left behind to reassemble the shattered pieces of her family. And no one seems to acknowledge that Julia is broken, too. Instead, her mother seems to channel her grief into pointing out every possible way Julia has failed.

But it’s not long before Julia discovers that Olga might not have been as perfect as everyone thought. With the help of her best friend Lorena, and her first love, first everything boyfriend Connor, Julia is determined to find out. Or was there more to her sister’s story? And either way, how can Julia even attempt to live up to a seemingly impossible ideal?

An unforgettable memoir about a young girl who, kept out of school, leaves her survivalist family and goes on to earn a PhD from Cambridge University.

Born to survivalists in the mountains of Idaho, Tara Westover was seventeen the first time she set foot in a classroom. Her family was so isolated from mainstream society that there was no one to ensure the children received an education, and no one to intervene when one of Tara’s older brothers became violent. When another brother got himself into college, Tara decided to try a new kind of life. Her quest for knowledge transformed her, taking her over oceans and across continents, to Harvard and to Cambridge University. Only then would she wonder if she’d traveled too far, if there was still a way home.

Brown Girl Dreaming tells the story of my childhood, in verse. Raised in South Carolina and New York, I always felt halfway home in each place. In these poems, I share what it was like to grow up as an African American in the 1960s and 1970s, living with the remnants of Jim Crow and my growing awareness of the Civil Rights movement.

It also reflects the joy of finding my voice through writing stories, despite the fact that I struggled with reading as a child. My love of stories inspired and stayed with me, creating the first sparks of the writer I was to become.

(Disclaimer: This book contains laguage that some may find offensive)

Born a Crime is the story of a mischievous young boy who grows into a restless young man as he struggles to find himself in a world where he was never supposed to exist. It is also the story of that young man’s relationship with his fearless, rebellious, and fervently religious mother—his teammate, a woman determined to save her son from the cycle of poverty, violence, and abuse that would ultimately threaten her own life.

The stories collected here are by turns hilarious, dramatic, and deeply affecting. Whether subsisting on caterpillars for dinner during hard times, being thrown from a moving car during an attempted kidnapping, or just trying to survive the life-and-death pitfalls of dating in high school, Trevor illuminates his curious world with an incisive wit and unflinching honesty. His stories weave together to form a moving and searingly funny portrait of a boy making his way through a damaged world in a dangerous time, armed only with a keen sense of humor and a mother’s unconventional, unconditional loveelse? Not good

The Hate U Give Cover.jpg 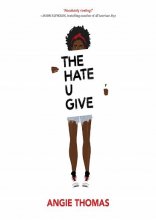 The Hate U Give

Sixteen-year-old Starr Carter moves between two worlds: the poor neighborhood where she lives and the fancy suburban prep school she attends. The uneasy balance between these worlds is shattered when Starr witnesses the fatal shooting of her childhood best friend Khalil at the hands of a police officer. Khalil was unarmed.

Soon afterward, his death is a national headline. Some are calling him a thug, maybe even a drug dealer and a gangbanger. Protesters are taking to the streets in Khalil’s name. Some cops and the local drug lord try to intimidate Starr and her family. What everyone wants to know is: what really went down that night? And the only person alive who can answer that is Starr.

But what Starr does—or does not—say could upend her community. It could also endanger her life.

Lord of the Flies Cover.jpg

Lord of the Flies

Lord of the Flies explores the dark side of humanity, the savagery that underlies even the most civilized human beings. William Golding intended this novel as a tragic parody of children's adventure tales, illustrating humankind's intrinsic evil nature. He presents the reader with a chronology of events leading a group of young boys from hope to disaster as they attempt to survive their uncivilized, unsupervised, isolated environment until being rescued.

Additional reading is required for students enrolled in Honors and AP courses.
Summer Reading
Back to top