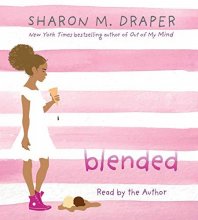 Eleven-year-old Isabella is used to these kinds of comments - her father is black; her mother is white - but that doesn't mean she likes them. And now that her parents are divorced (and getting along WORSE than ever), Isabella feels more like a push-me-pull-me toy.

One week she’s Isabella with her dad, his girlfriend Anastasia, and her son Darren living in a fancy house where they are one of the only black families in the neighborhood. The next week she’s Izzy with her mom and her boyfriend John-Mark in a small, not-so-fancy house that she loves.

Being split between Mom and Dad is more than switching houses, switching nicknames, switching backpacks: it’s also about switching identities. If you’re only seen as half of this and half of that, how can you ever feel whole?

This edition of Margot Lee Shetterly’s acclaimed book is perfect for young readers. It is the powerful story of four African American female mathematicians at NASA who helped achieve some of the greatest moments in our space program. Now a major motion picture starring Taraji P. Henson, Octavia Spencer, Janelle Monae, Kirsten Dunst, and Kevin Costner.

Before John Glenn orbited the earth, or Neil Armstrong walked on the moon, a group of dedicated female mathematicians known as “human computers” used pencils, slide rules, and adding machines to calculate the numbers that would launch rockets, and astronauts, into space.

This book brings to life the stories of Dorothy Vaughan, Mary Jackson, Katherine Johnson, and Christine Darden, who lived through the Civil Rights era, the Space Race, the Cold War, and the and the movement for gender equality, and whose work forever changed the face of NASA and the country.

"With a bolt of lightning on my kicks . . .The court is SIZZLING. My sweat is DRIZZLING. Stop all that quivering. Cuz tonight I’m delivering," announces dread-locked, 12-year old Josh Bell. He and his twin brother Jordan are awesome on the court. But Josh has more than basketball in his blood, he's got mad beats, too, that tell his family's story in verse, in this fast and furious middle grade novel of family and brotherhood from Kwame Alexander.

Josh and Jordan must come to grips with growing up on and off the court to realize breaking the rules comes at a terrible price, as their story's heart-stopping climax proves a game-changer for the entire family.

Lost in the Amazon Cover.jpg

Lost in the Amazon: A Battle for Survival in the Heart of the Rain Forest (Lost #3)

Peru, Christmas Eve, 1970. It was supposed to be a routine flight, carrying 86 passengers across the Andes Mountains and home for the holiday. But high above the Amazon rainforest, a roiling storm engulfs the plane. Lightning strikes. A deafening whoosh sweeps through the cabin. And suddenly, 17-year-old Juliane Koepcke is alone. The plane has vanished. She is strapped to her seat and plunging 3,500 feet to the forest floor.

On Christmas Day, she wakes. She is injured, covered in mud, but strangely--miraculously--alive. And now, in a remote corner of the largest rainforest on Earth, the real battle for survival begins. 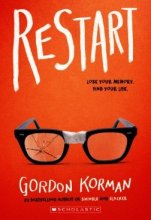 Okay, he’s Chase. But who is Chase? Soon he’s hearing stories of the alpha jock and bully who held a reign of terror over an entire school. Is that the person he was … and is destined to be again?

Is it possible to restart?

Other Words for Home Cover.jpg

Other Words for Home

Jude never thought she’d be leaving her beloved older brother and father behind her, all the way across the ocean in Syria. But when things in her hometown start becoming volatile, Jude and her mother are sent to live in Cincinnati with relatives. At first, everything in America seems too fast and too loud. The American movies that Jude has always loved haven’t quite prepared her for starting school in the U.S. –and her new label of “Middle Eastern,” an identity she’s never known before. But this life also brings unexpected surprises—there are new friends, a whole new family, and a school musical that Jude might just try out for. Maybe America, too, is a place where Jude can be seen as she really is. This lyrical, life-affirming story is about losing and finding home, and most importantly, finding yourself

EVERYONE DREAMS OF FINDING BURIED TREASURE, and that is why Robert Louis Stevenson's Treasure Island is such an enduring classic. Treasure Island gave Stevenson his first popular success, and it's easy to see why it remains a favorite of readers of all ages. The tale of young Jim Hawkins and his unlikely band of adventurers strikes at the very heart of our own desire to lose ourselves among hidden chests, cryptic maps, and treacherous companions.

If you loved it when you read it earlier, you owe it to yourself to revisit the deceitful Long John Silver, the dull but reliable Dr. Livesey, and the pompously naïve Squire Trelawney. If this is your first visit to the high seas, find yourself a comfortable chair, because you won't be putting the book down until the last mutineer is brought to justice and last gold coin counted.

This Prestwick House Literary Touchstone Classic includes a glossary and notes to help readers unfamiliar with some of the vocabulary and nautical terms appreciate Stevenson's grand adventure.

Additional reading is required for students enrolled in Honors Courses.
Summer Reading
Back to top