On Saturday, March 5, the C.R.A.B. (Cool Robots And Builders) Robotics Team of Huntsville was announced as the State Champions in the 2022 FIRST® LEGO® League Alabama Championship.

FIRST is the world’s largest student celebration of STEAM (science, technology, engineering, art, and math) with multiple levels of competition for grades PK-12. The C.R.A.B. team was ecstatic when they were named the Alabama State Champions of FIRST LEGO League and invited to go to the FIRST World Festival, the top competition in the world. They actually were the state champions in 2020, but the pandemic hit, and the world championship was canceled. This will be the return of the competition, and the C.R.A.B. team is thrilled to represent the State of Alabama. The last FIRST Championship in Houston, Texas, included 33,000+ attendees, 15,000+ students, and 700+ teams from 40 different countries.

Read more about the "Gracious Professionalism" displayed during the competition on the HCMS Website Article.

In order to compete in FIRST LEGO League (FLL), each team builds and programs an autonomous robot, along with creating an innovative solution to a problem for this season’s CARGO CONNECTSM challenge. As a volunteer with a student on the team, Michele Durda understands just what this group has accomplished. “After doing their own research, these students chose to tackle the problem of transporting wind turbine blades,” says Durda. “After researching on their own, they set out to talk to knowledge experts, and eventually designed their own special purpose aircraft. We couldn’t be more proud of all their hard work.” The team was also nominated for the Global Innovation Award for their innovative solution. They will compete against other nominees from around the world for twenty semi-finalist positions to showcase their research and invention, and present to industry leaders during the FIRST LEGO League Global Innovation Award event in June. 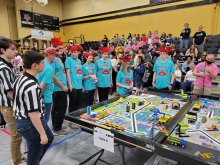 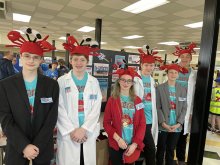