Challenger Middle School 8th grade CyperPatriot teams worked hard to use their knowledge of researching and developing new things leading up to and during the state CPXIII competition.  The following two teams took first and third place in the competition: 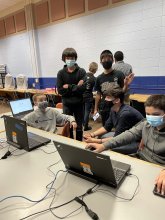 C0D3R3D.2, or "CodeRed 2" has 2 team members, Suyash Ojha and Hayden Smith, that were on the original CodeRed from last year as junior members on that first-place team.  They began cometing in CyperPatriot as 6th graders.  Hugh Nguyen also competed last year as a seventh-grader on a different team, but was then recruited by C0D3R3D.2 to be their team's network specialist this year which he did to fidelity - scoring higher than any other team in the state on the sub-component. 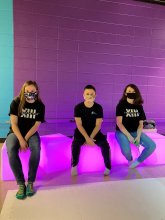 The Hypertext Assassins set out to beat C0D3R3D.2 and improve their positioning with each round leading to the state round.  They were excited to be able to place in the state above 18 of the 21 teams in Alabama as the 3rd place winners.  They were able to achieve this despite two team members being in quarantine, one of which found out they had to quarantine a mere 20 hours before the competition.  Luckily, the team was able to send a cyber computer home to divide the work.

Both teams would like to thank the National Space Club, Huntsville Chapter for sponsoring this year's entrance fees, as well as Mr. Jim Morse of Huntsville High for sharing his expertise as their CyperPatriot Mentor.
Tags:
Celebrations
Students
Category:
General News
Back to top