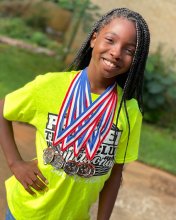 Two current Huntsville City Schools students along with two recent graduates participated in the AAU Junior Olympic Games which were held at Humble High School in Houston, Texas last week.  In order to advance to the Jr. Olympic Games, competitors had to first place in the top 16 at a district qualifying event, and the top 6 (or top 4 for multi-events) for the regional qualifier.  The four HCS students which qualified for and attended the AAU Jr. Olympic Games are all members of the Parker Track Club, led by Zeke Parker:

Samiah Harden achieved a personal record and came in second in both of her heats, while placing 21st in the 800-meter run and 26th in the 400-meter dash overall nationally.  She called her performance at the meet “one of the best that I’ve had” and said that “it felt amazing, because it’s a privilege.” 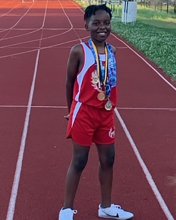 Max Patterson achieved a personal record in the boys’ shot-put event and also placed 63rd overall in the 800-meter run.  He said, “It felt really amazing!  The competition was tough!”

Jerkeisha and Jerneisha Lewis both participated in the 4x100 team relay, with their team placing 44th in the nation.  They both remarked about feeling honored, blessed, and overwhelmed.  Jerkeisha said, “To experience and see all the talent around our country was astonishing.”  Jerneisha added that it was exciting to “be around kids who love track as much as I [do] and fought just as hard to be in that same position.”

Both Jerkeisha and Jerneisha plan to attend Berea College in Kentucky and continue in the track and field programs there. 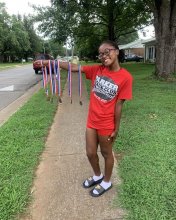 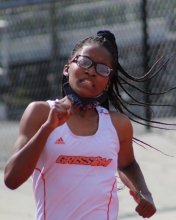