High school teams from across the state competed in a series of tournaments during the school year to qualify for the event. 177 teams participated in the two-day competition. The two teams from Grissom which secured first and second place in the ASABFA state championship have now earned coveted spots to compete in the Bassmaster High School National Championship.

Teams from throughout the country will head to Anderson, SC to compete in the event from August 11-13 on Lake Hartwell. Of the 13,000 high school B.A.S.S. members nationwide, approximately 275 teams qualified for the national championship. Each team consists of 2 high school anglers, along with a qualified boat captain. 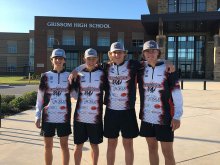