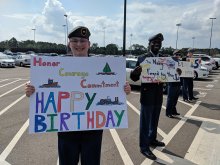 When Grissom JROTC Instructor LTC (Ret.) Johnnie Richardson was contacted by the family of Clarence Owens, a local WWII Navy veteran, they had a simple request: to have a few of the cadets stop by Owen’s house to sing happy birthday.  The students wanted to do something really special for his 95th birthday, though, and planned a surprise celebration at the school.

The Grissom JROTC cadets had Mr. Owens picked up at his house by a limousine.  He was greeted at the school with posters and a saber salute, a performance of “Anchors Aweigh” by the Grissom Band, a video tribute, mementoes, and a birthday cake.

LTC Richardson is proud of his students for taking on such a worthwhile project and creating a special memory for Mr. Owens and his family.  Grissom JROTC Cadet Madison Golden said, “it was a lot more planning than I imagined, but we are really glad we did it.”  Cadet Trevor Macdonald emphasized the importance of “honoring our local World War II Veterans for their service and sacrifice for our country.” 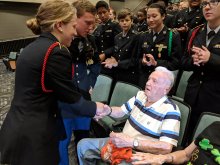 After the celebration, Clarence Owens said the event “came as a complete surprise to me.  I thought everybody forgot me.”  Choking back tears, he added, “I sure appreciate it.”

Clarence Owens grew up in Huntsville and served in the Navy from 1940-1948.  He has enjoyed a career with Huntsville Police Department’s Motorcycle Division, Chrysler, and the Madison County Sheriff’s Department.