Hampton Cove Elementary Named One of Best Schools in Nation

U.S. Secretary of Education, Betsy DeVos announced today that the Hampton Cove Elementary School has been named a 2019 National Blue Ribbon School.  Hampton Cove is one among 312 public schools receiving the honor this year. Only five schools in Alabama earned this recognition.  The coveted National Blue Ribbon Schools award affirms the hard work of educators, families and communities in creating safe and welcoming schools where students master challenging and engaging content. 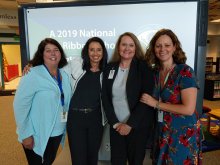 Hampton Cove Principal Christina Spivey said they were “absolutely thrilled and honored to be named a National Blue Ribbon School by the U.S. Department of Education as an Exemplary High Performing School.”  Spivey said there were many factors for this honor, including their teachers, staff, students, PTA, and community members, because “it takes all of us working together as a family… and this is Hampton Cove Elementary, a family who works together to succeed.”  She went on to thank the efforts of former Assistant Principal Rebecca Wrenn, and former principals Ray Landers and Autumn Bray, adding that “I stand on their shoulders today.”  Superintendent Christie Finley echoed the sentiments from Principal Spivey and went on to say a special thank you to all of the stakeholders: “because without you, this wouldn’t be possible.”

Each year, the U.S. Department of Education invites nominations from the top education officials from all states based on two performance categories:  Exemplary High Performing Schools, as measured  by state assessments of nationally normed tests, or Exemplary Achievement Gap Closing Schools, which closed achievement gaps between a school’s student groups and all students.

Representatives from Hampton Cove Elementary and Huntsville City Schools will attend a two-day awards ceremony in Washington, D.C. on November 14 and 15 to celebrate their hard-earned achievements. 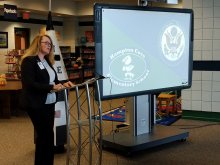 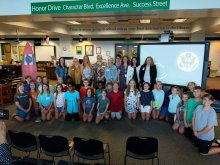