HCS will be operating in Masks Mandatory beginning Saturday, Jan. 15 through Friday, Jan. 21. HCS utilizes a Mask Matrix which decides between Masks Optional and Masks Mandatory depending on the overall community transmission rate for Madison County during the preceding 10 business days.  Use the More Information button below to access the COVID-19 Infocenter and view the full Mask Matrix.

Colten Steele, a sixth-grade student at Hampton Cove Middle School (HCMS), recently earned national recognition for his National History Day (NHD) Project which focused on the Navajo Code Talkers credited with helping win World War 2.  Colten’s project was selected as one of only 51 international projects to be showcased in a National Museum of American History exhibit at the Smithsonian Learning Lab.  The showcase premiered virtually this year, due to the pandemic, and runs from Tuesday, June 15 through Tuesday, June 29.  The theme for this year’s National History Day Project was Communication in History: The Key to Understanding.

Colten Steele Pointing at Part of His Project.jpg 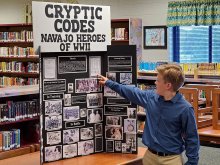 “I was very proud of Colten’s work,” says HCMS Assistant Principal April Clark, “Knowing that a student from Alabama would have their work represented at a national level is just outstanding.”  She adds that Colten’s achievement goes a long way to show his peers just how much they can accomplish at their own school.

All sixth-grade honors history students at HCMS participated in the National History Day Project.  Students began working on the project in early September and then submitted them in January.  The projects were then showcased and judged at the school.  Projects that won at HCMS had the opportunity to go on to the state and national levels.

Colten and his mother played around with several ideas for the project, but eventually settled on the Navajo Code Talkers since it seemed to fit the NHD theme so well.  Colten says that finding out his project was selected for display at the Smithsonian was “pretty cool and awesome.”

HCMS includes the NHD Project for sixth grade honors history students as part of an effort the school makes to ensure their students are well-rounded.  Projects like this also help students to dig deep into history and to understand America from various points of view.

Colten’s project, along with other featured projects, can be viewed virtually at the Smithsonian Learning Lab under Region D.