Congratulations to Mr. Gregg Crabtree, a fourth-grade teacher at Goldsmith-Schiffman Elementary School, who has been selected as this week’s HCS Changemaker! 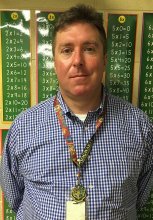 Mr. Crabtree has always loved school and says he appreciates how structured the school environment can be.  In college, he majored in Biology but says that he never felt very satisfied.  He was always being asked if he was a teacher or flat-out told that he should be one.  After the events of September 11, 2001, Mr. Crabtree spent a lot of time thinking about how he could contribute to society and so he decided to enroll in education classes.  Part of that process involved observing other teachers, and it was then that Mr. Crabtree realized he was finally on the path towards doing what he was meant to do.

“He just goes above and beyond with everything that he does,” says Goldsmith-Schiffman Principal Jennifer Douthit, adding that he is one of the hardest working people she knows.  Mrs. Douthit also says that he is incredibly modest and is always the first one to volunteer whenever the school needs help with anything.

Mr. Crabtree’s classroom is one where students will often be engaging in experiments and other hands-on activities.  Aidan McDavid, one of his students, says that Mr. Crabtree “teaches lessons efficiently, and he is really nice and kind to all of us.”  Mr. Crabtree can sometimes be seen getting down on the floor with the students, and at other times he might be using superhero voices to represent different methods of solving math equations.  He says, “I like to be a part of the learning process with the students.”  Fourth-grade student Emily Stolz says, “Mr. Crabtree is nice, he’s funny, and he’s a really good teacher.”

Outside the classroom, Mr. Crabtree likes to hike the various trails around Huntsville, such as those on Green Mountain.  He enjoys reading non-fiction and finds special enjoyment in historical fiction relating to the ancient world.  He loves watching movies and says that older films tend to be his favorites.  While he admits that it’s sometimes enjoyable to have some time to himself, he also often likes to spend time with family and friends.

Mr. Crabtree works very hard to ensure that his students will be prepared for the next grade level, but he also hopes they pick up some things that aren’t in the books.  He wants to make sure that they develop good character skills, study habits, and a general love of learning.  He doesn’t just want his students to succeed, he wants them to lead.  As a result, his students leave the fourth grade better than they arrived, making it clear that Mr. Crabtree is a true changemaker.