Congratulations to Mrs. Ann Clark, a math teacher at Huntsville High School, who has been selected as this week’s HCS Changemaker! 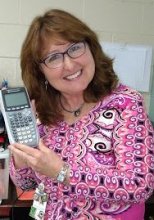 After Mrs. Clark had children, she became fascinated with watching how they would interact, play, and think.  She would watch them play with blocks and wonder how they came up with different patterns or designs.  This interest in cognitive development is what led her to becoming an educator, and her love of working with numbers lent itself to math as a subject area.  In her words, “Numbers are like puzzles, and I love working puzzles.”  Mrs. Clark likes coming to solutions and making sense of things, and she says that’s what math is all about.

“Ann doesn’t just look at a kid and see where they are,” says Huntsville High Principal Aaron King, “she sees where they could be.”  He goes on to say that she doesn’t just see the potential, she helps them achieve that potential.  Mrs. Clark says that students are always interacting in her classroom because she is always pausing to ask questions and engage them.  To help break any potential monotony, she uses something called a Depth of Knowledge Wheel.  The wheel has four levels of complexity and students engage in the material based on the level they land on.  “Weirdly for math, we’ve had a lot of fun moments in there,” says 10th grade student Hannah Wilson, “it’s exciting to learn with her.”

Outside the classroom, Mrs. Clark loves to sew and quilt.  She says that she enjoys getting to pick the colors, patterns, and sizes that she wants and does a lot of her quilting work on a computer or with the aid of an embroidery machine.  She and her husband also do a lot of work with the Huntsville Inner City learning Center.  Through that organization they are able to not only feed, but tutor and help kids keep their skills up in a safe environment during the summer months.

Mrs. Clark makes herself available to students every morning, opens her classroom for assistance four days a week during power hour, and also remains on-call outside of school via a classroom messaging app.  She wants students to leave her classroom having learned the benefits of struggle and hard work.  All the time, effort, and hard work she puts into her craft as an educator makes that a near guarantee.