Congratulations to Mrs. Elizabeth Allen, a third-grade teacher at Hampton Cove Elementary School, who has been selected as an HCS Changemaker! 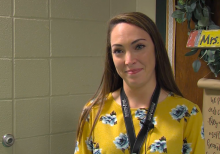 Mrs. Allen says that it was teachers who were her biggest cheerleaders and fans when she was growing up.  In particular, she remembers with fondness a third-grade teacher who was quite strict but pushed Mrs. Allen to be the best she could be.  It was largely because of such role models that she realized, even as early as elementary school, that she wanted to be a teacher herself.  In her words, “I want to be the adult that I needed for the kids that I interact with every day.”

“She is a teacher leader,” says Hampton Cove Elementary Principal Christina Spivey, “always going above and beyond for her students, her parents, her teammates, and the rest of the faculty.”  Her students do a lot of hands-on activities, though that is sometimes limited with the current COVID-19 situation, but she says small-group activities are her favorite because they get to dive a lot deeper into their work.  Each week, she holds one-on-one conferences with students to encourage them to self-monitor and take ownership of their own learning process.

Mrs. Allen describes herself as an avid reader, and while not working on classroom activities she tries to get in as much as she can.  Her favorite genre is mystery, and in particular she enjoys the work of Colleen Hoover because it’s often difficult to predict the ending of the book due to plot twists.  Mrs. Allen also enjoys doing just about any outdoors activity, including swimming, boating, and hiking.  She says, “I like the calmness and tranquility that comes from spending time outside.  I always feel more centered when I come in from spending time outdoors.”

If there were a single word that describes the ultimate lesson students get from their year with Mrs. Allen, it would be perseverance.  Third grade can be one of the most challenging of the elementary grades, due to the large number of content standards, but Mrs. Allen pushes students to never give up on themselves.  She reminds them that they are capable of whatever they set their minds to… if they are willing to put in the legwork.

“From day one,” she says, “we talk about having a growth mindset.  It doesn’t matter how old you are, it just matters how you handle yourself in those situations of struggle.”  Mrs. Allen is always there to help them when they really need it, though, and students leaving her class will know they have a staunch ally well beyond the third grade.