Congratulations to Mrs. Emily Mason, a science & biotechnology teacher at New Century Technology High School, who has been selected as this week’s HCS Changemaker! 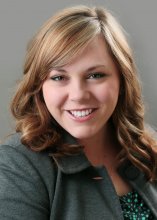 Mrs. Mason says that when she was growing up, biotechnology wasn’t a field most people discovered until college.  Today, however, it is a growing field that students can start experiencing in high school.  When she found out about a program at New Century which involved teaching that very subject, she jumped at the chance to be a part of it.  When she began college, Mrs. Mason wasn’t sure which direction she wanted to go, and so she spent a lot of time researching different science-related career paths.  That knowledge and experience is also something she enjoys sharing with juniors and seniors to help them plan and prepare for their future.

“She is definitely all about building relationships with the students,” says New Century Principal Sheila Roby, “and with helping them find their best, be their best, and learn to do their best.”  Mrs. Mason utilized her contacts at Hudson Alpha to expand the program at New Century, which eventually led to the inclusion of an internship program.  The program allows New Century students to receive training while working on real-world projects.  “She’s definitely one of our best teachers here,” says New Century student Garrett Hendley, “she really likes to create an environment where kids feel cared for.”  Mrs. Mason works individually with students, encouraging them to attempt difficult assignments on their own but then providing help when it is needed.  Colleen McEniry, another student at New Century, says that Mrs. Mason “seems to be able to see what each individual student’s strengths are,” and then she works to encourage those strengths while also improving weaknesses.

Outside the classroom, Mrs. Mason likes to spend her time hanging out with her husband and their two-year-old daughter.  They love spending time outdoors and travelling to national parks, and they recently took a trip to the Rocky Mountain National park where they hiked a very snowy, steep trail.  Mrs. Mason is also an avid runner, having taken the activity up after she stopped playing soccer.

Mrs. Mason wants her students to realize that they can accomplish great things when they strive for it.  Scientific concepts can often be rather daunting, and the struggles students encounter in her classroom embolden them to tackle those concepts head-on.  The result is that students leave her with the confidence to succeed in all their future endeavors, and that’s what being a changemaker is all about.