Students from Huntsville City Schools spent the weekend at Auburn University’s NCAT (National Center for Asphalt Technology) Test Track putting their Greenpower Car to the test.  The kids are a part of Greenpower Team USA, and will once again return to England to compete in the International Finals 2016 at the Rockingham Motor Speedway in October.

Greenpower USA Lead Teacher, Drew Sparks, said the track in Auburn provided a great resource to collect data on the car and race on a surface that is similar to the conditions of the Rockingham Speedway.  Sparks said it was especially gratifying to see all of the hard work of the kids really pay off.  The car actually travelled further and faster than ever, and the students are more excited than ever to travel to England and race. 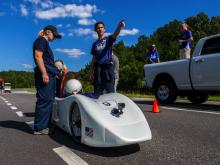 Last year, Huntsville’s Team USA finished 8th in the International Race in England, out of over 70 cars in the event.  The students also won the Siemens Engineering and Design Award for the second time in 2015. The Greenpower Education Trust sponsors the event, an electric car challenge, which requires students to design, build, and race an electric car with help from teachers and industry mentors. Each team is given the same standard motor, set of batteries, and a strict set of regulations to follow.  Students must use all of their science, technology, engineering, and math skills to come up with a vehicle to compete.