Click the More Information button below for the most recent updates regarding the cybersecurity threat, as well as student, staff, and faculty return on Monday.  Today's update includes a letter from HCS Superintendent Finley, as well as updates on the magnet application and the 2021-2022 school year calendar survey.

From the U.S. Army Materiel Command Office of Public Affairs 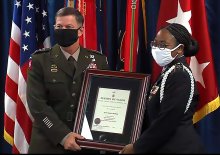 Army Materiel Command Deputy Commander Lt. Gen. Flem B. “Donnie” Walker Jr. conducted an award presentation in honor of JROTC Cadet Lt. Col. Ketty-Daphney Ngwese of the Lee/New Century Technology High School JROTC General Battalion, who received the Legion of Valor Bronze Cross for Achievement on Monday, November 9th, 2020. The award is the second highest award presented annually to JROTC cadets by the Department of the Army. Only 75 JROTC cadets are selected for the award each year.

"I'm truly greatful to everyone that's brought me to this place that I am today," says JROTC Cadet Lt. Col. Ketty-Daphney Ngwese, "especially my parents, my friends and just everyone that's around me and congratulating me and pushing me to be the very best that I can be." 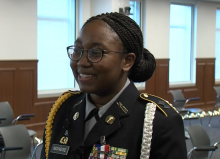 JROTC Cadet Lt. Col. Ketty-Daphney Ngwese exemplifies a high level of scholastic excellence in military and academic subjects at Lee High School. She is the first JROTC cadet from Huntsville City Schools to receive the Legion of Valor. She is also the first JROTC cadet from Huntsville City Schools to be elected to serve as president for JROTC in Alabama. She is a senior at New Century Technology High School and the Battalion Commander for the Lee/New Century Technology JROTC General Battalion. She is ranked 4th out of 115 seniors with a 4.3 GPA and a 33 ACT score, is currently taking all AP classes and plans to attend Howard University studying Accounting and Finance.

"I've just watched her grow over her high school experience," says Lee/New Century JROTC Sr. Army Instructor Col. (R) Diane Richie, "what I thought about her in her freshman year she's brought to fruition here as she journeys through her senior year of high school."

In support of the Army’s number one priority, which is People, it is important to Army Materiel Command leadership, including Lt. Gen. Walker, to provide a high level of recognition for Cadet Lt. Col. Ngwese’s accomplishment.