This summer, Huntsville High School’s own Lt Col David Murphy, USAF (Ret.), attended Space Camp for Educators at the U.S. Space & Rocket Center from June 16 to June 20 and was selected to receive the Right Stuff Award, one of the highest honors at the camp.  The award, which is named from the Tom Wolfe novel of the same name, is given to the trainee who exemplifies the courage, integrity, and excellence of the early space explorers and test pilots.

Lt Col Murphy is the senior aerospace science instructor at Huntsville High, which has one of the first ten Space Force JROTC units in history.

The U.S. Space & Rocket Center is a destination for many children dreaming of reaching for the stars, but it is also a premiere destination for select educators who come from across the United States and different parts of the world to experience the Space Academy for Educators program.

During his time at Space Camp, he was able to participate in authentic astronaut training simulators and activities developed to promote learning in a classroom setting. Curriculum at the camp includes NASA-inspired lesson plans and is correlated to the National Science Education Standards, which will serve to provide Lt Col Murphy with many ways to incorporate the experience into lessons for his own students at Huntsville High. 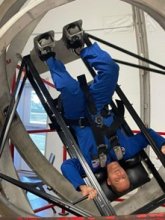