The McNair Junior High School football team celebrated their HCS Middle School Football Championship with a parade on the school’s campus this week.  The team completed a victory lap from the front of the school to the back, escorted by the Huntsville Police Department.

McNair football player Michael Crum said that the championship victory “felt amazing… it felt like we delivered to the school.”

The Middle School Championship game took place on October 26 and featured the Hampton Cove Bulls vs the McNair Wildcats.  McNair ended up securing their victory with a hard-fought 26-14 final score.  As their starting quarterback suffered an injury earlier in the season, McNair Head Football Coach Aquarius Rhodes had Cortez Hudson filling the important position for the majority of the championship game.  “I knew he was going to be special back there at quarterback,” said Coach Rhodes.

Cortez simply said, “I had to show him that I knew how to play it.”

This week’s parade allowed students to collectively cheer on their team’s victory and consisted of the McNair Junior Wildcat Band, cheerleaders, coaches, and the 2022 Championship Team, all of which concluded with a reception in the school cafeteria. 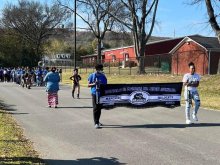 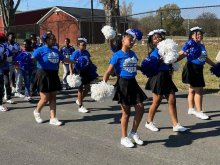 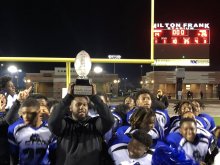 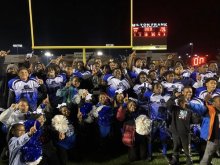