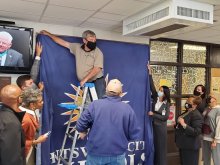 “This means everything to us,” said MLK Jr. Elementary Principal Cheryl Askew, “it’s wonderful to me… my heart is just full.”  Principal Askew pointed out that they try to incorporate Dr. King and his ideologies in their daily morning announcements, but now the children will get to see who wrote and spoke about those things as they enter the building.

Superintendent Christie Finley said that “we are so very excited and fortunate that the Broadway Theatre League and two fabulous donors in our community, Mr. Robinson and Ms. Reynolds, donated this beautiful mural of Dr. Martin Luther King Jr.”

According to Broadway Theatre League Executive Director Andrew Willmon, “When Dianne Reynolds and Breck Robinson saw the painting, they knew that it had to have a special place here at Martin Luther King [Jr.] Elementary.”  Mr. Robinson immediately got to work with his old kindergarten teacher, Ms. Reynolds, to get the work donated to the school.

“I grew up in this area,” said Mr. Robinson, “I just thought it was very apropos and I think it actually turned out beautifully.”

The piece was created as part of a special performance, called Artrageous, which kicked off the Broadway Theatre League’s return after being on pause since the start of the pandemic.  Artrageous involves the creation of art pieces on a live stage set against music, dancing, or other acts. 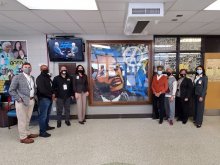