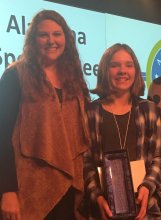 Mt. Gap P-8 student Erin Howard recently won the Scripps Alabama State Spelling Bee, and will go on to represent the state in the national competition for the second year in a row.  Erin won the state competition, which had a total of 55 contestants, with the correct spelling of Sikhism.  The National competition will take Erin to Washington D.C., where she will compete against over two hundred other finalists.

While Erin would not be the first person from Alabama to win the Scripps National Spelling Bee, she says she is still excited at the opportunity to be the second champion.  The trip to Washington D.C. is a chance to meet spellers from all over the world, and Erin says she “loves the adrenaline of the spelling bee, it’s […] exhilarating and excruciating.”  Erin also says she is grateful towards her teachers at Mt. Gap, several of which came out to support her during the state competition, as well as the numerous students that sent her letters wishing good luck.

Ms. Brittney Kent, a Reading and English teacher at Mt. Gap P-8, spent her birthday attending the state competition to support Erin.  She says that Erin is phenomenal in the classroom, but “she acts like a normal sixth grade student, and she doesn’t make it known that she’s going to the national spelling bee.”  Ms. Kent says that she knew Erin would do well, but when it was down to the final three she was “on the edge of her seat.”

Erin is already looking at several colleges and says she hopes to find a good pre-med program that will help achieve her goal of becoming a pediatrician.