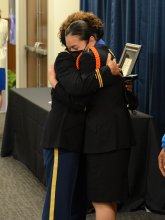 Each year, cadets are nominated internationally for the award, which is based on academic and military leadership and honors, discipline, courtesy, and character.  Only 75 are selected nationwide for the second-highest honor a JROTC cadet can achieve.

“I never imagined receiving such a prestigious award,” said Cadet Zhang, “just being here is amazing.”  Zhang went on to say that she was very shy as a freshman, but the JROTC program provided “a sense of belonging and familiarity” which allowed her to practice self-discipline and build up her role as a leader.  She especially gave credit to her JROTC instructor, Col. (R) Diane P. Richie, whom she says is “more than an instructor… she’s more like family.”

Col. (R) Richie describes Zhang as a “silent hero” and a role model who has spent countless hours involved in community service in addition to her other academic and JROTC responsibilities.  “Coming in second is not an option for her,” she adds.

In addition to her incredible service in the JROTC program, Zhang has also earned a 35 on the ACT and an overall GPA of 4.58.  She is currently planning to attend either the Massachusetts Institute of Technology (MIT) or the Military Academy at WestPoint majoring in computer science.

Her sister currently attends West Point, however, which might just tip the scales in that direction. Weixing says there is definitely a little bit of sisterly rivalry there but adds that “she’s the one who pushed me to join the JROTC program in the first place.”

Zhang is the second JROTC cadet from Huntsville City Schools and from the Lee/New Century General Battalion to receive the Legion of Valor.