Congratulations to Mrs. Angela Wimberly, an eighth-grade teacher at Hampton Cove Middle School, who has been selected as this week’s Teacher Spotlight recipient! 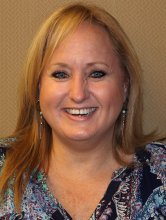 When Mrs. Wimberly first graduated from college she worked as a software analyst for companies such as Dynetics and Intergraph.  About ten years later, she began tutoring several children in her neighborhood. She worked with them to help improve their understanding of math concepts.  Before long, she realized she was actually enjoying those tutoring sessions more than her full-time job, so she decided to return to college, earn her secondary certification, and make education her new full-time job.  Mrs. Wimberly says that it was definitely the right move for her, because she has enjoyed it ever since and has no regrets whatsoever.

“She is very engaging in her classroom,” says Hampton Cove Assistant Principal April Clark, “she enjoys teaching kids [and] you can tell every day.”  Mrs. Wimberly does a lot to help build confidence in her students, hoping to ensure that they go on to be very successful in high school.  Sometimes that means offering them extra tutoring sessions and practice time.  “She knows some of us need help,” says 8th grade student Mireya Rogers, “and I love it because now I have an A in her class.”  Mrs. Wimberly builds great relationships with her students as well and says that “everyone has a different story.”  She focuses on making math relevant, applying what they learn to real-world situations.  The result of these efforts is clearly stated by Jillian Bole, another of Mrs. Wimberly’s students: “I learned a lot in math this year, more than I have in a long time.”

When she isn’t teaching, Mrs. Wimberly and her husband enjoy travelling to Nashville to see their daughter or to Birmingham to visit their son.  She says that both enjoy showing their parents around the city when they get to come for a visit.  In the end, Mrs. Wimberly’s true hobby is her family.

Students at Hampton Cove Middle School have a caring, knowledgeable, and supportive teacher in Mrs. Wimberly.  Assistance Principal Clark says, “This year Ms. Finley called us to be change makers, and Mrs. Wimberly is definitely one of those change makers that we have in Huntsville City Schools.”

Each week, ETV will showcase an outstanding Huntsville City Schools educator as a feature in the “Teacher Spotlight." Highlighted recipients receive gifts from SchoolCraft.
Tags:
Changemakers
Category:
General News
Back to top