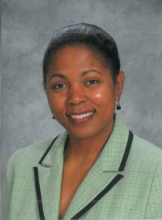 Ms. Lucas became a math teacher fifteen years ago to follow in her mother’s footsteps, who taught in Baldwin, MO.  Like her mother, she also has a strong passion for music, which she employs by teaching percussion at First Missionary Baptist Church.  She says that her mother always focused on building positive relationships, which probably contributed to Ms. Lucas working as a Positive Behavior Intervention and Supports (PBIS) leader at her school.  When she isn’t teaching math or music she is also a writer, and has recently published a book called Flush it and Go With the Flow – a wellness book to help students, teachers, and other staff members learn to intervene before things escalate out of control.  Even outside her primary role as a Huntsville City Schools math teacher, it seems Ms. Lucas is always educating others in a positive way.

“She has a relationship with every one of her students,” says Grissom Principal Becky Balentine, “but also students that aren’t even in her class.”  Ms. Balentine goes on to say that even students who have already moved on past Algebra I have stated that they want to be in Ms. Lucas’ class.  Alandris Smith, one of Ms. Lucas’ students, says that “she knows what she’s doing, [and] she makes sure we understand everything she’s talking about.”  Ms. Lucas says, “they’re looking for the real deal – our actions, then, speak louder than our words.”  She certainly lives up to this creed, as is evidenced when Ethan Bartee, another student, points out that she always makes herself available outside of class for student assistance.

Students don’t just rely on Ms. Lucas for her ability to teach math exceptionally well, though.  According to Ms. Balentine, you can be having a tough day, but when you walk into Ms. Lucas’ classroom and see her, “it’s like a ray of sunshine.  As Ethan puts it, “she’s just a good person, all-around.”

Each week, ETV will showcase an outstanding Huntsville City Schools educator as a feature in the “Teacher Spotlight." Highlighted recipients receive gifts from SchoolCraft.
Tags:
Changemakers
Category:
General News
Back to top