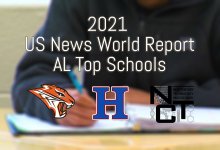 New Century Technology High School was featured as the second best school in the state of Alabama and also ranked at an impressive 213th nationally.  U.S. News gave NCTHS an overall score of 98.81 and noted the school’s 100% graduation rate.

U.S. News describes the highest-ranked schools as “those whose attendees demonstrated outstanding outcomes above expectations in math and reading state assessments, passed a diverse array of college-level exams, and graduated in high proportions.”

These rankings are based on data from the 2018-19 school year.