During the week of August 1st, three HCS students competed in the AAU Jr. Olympics in Greensboro, North Carolina.  In order to advance to the Jr. Olympic Games, competitors had to first place in the top 16 at a district qualifying event, and the top 6 (or top 4 for multi-events) for the regional qualifier.

Ariyana Lacey, a student at Weatherly ES, competed in the 4x100 relay team.

Samiah Harden, a student at the Academy for Academics & Arts Elementary, competed in the 400-meter dash, 800-meter run, and the 4x100 team relay. She finished in the top half of her events.

Ariyana, Samiah, and Max each also ranked as the fastest runners in their events for this region. 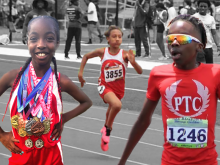