Students at Williams P-8 got to experience a virtual bus trip through the Mars landscape, without leaving the school campus, in the Generation Beyond Mars Bus Experience.  Lockheed Martin, in partnership with Huntsville City Schools, gave students the opportunity to enjoy the exciting experience of dust storms, human habitation, and even a glimpse at the Mars Rover.  In addition to the virtual bus ride, students also experienced hands-on engineering principles with rocket building, and got to have their photos taken with a digital Mars backdrop. 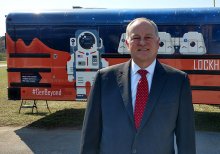 “It’s all about generating excitement,” says Jim Rogers, Lockheed Martin’s Representative for Government Affairs.  “One of these kids could be the next astronaut and go to Mars.”  He also says that he wants to encourage students to enter Science, Technology, Engineering, and Math (STEM) fields.  According to Williams P-8 Principal, Melissa Lindsey, “Lockheed Martin is working in collaboration with NASA to have an astronaut on Mars by 2030 – that’s our students at Williams, today.”

Gabrielle Flowers, a 6th grade student at Williams P-8, said that it was an interesting experience because she could “see what people will do when they go to Mars in the future.”  She also said that, even though it looks like it would be scary, she thinks it could be interesting to have a job that works towards going to the red planet.  One of the students’ teachers, Anthony Oliver, says “we talk about it in class a lot […], but to be able to see it, touch it, and see how it impacts their futures […] they’re going to want to invest their time in Science, Mathematics, and Engineering.”

Students Briefing Before Trip to Mars