Congratulations to Mr. Richard Childers, a self-contained special education teacher at Huntsville High School, who has been selected as an HCS Changemaker! 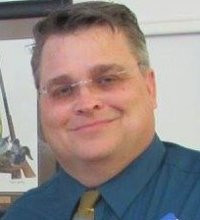 Mr. Childers became a special education teacher partly because he has a special needs child, but he also says that even before he was in education he always tried to work for the underdog.  He states, “I think everybody has potential.  Some people just need a little more help than others.”  While he’s only been teaching for three years, Mr. Childers smiles pleasantly and teases that his own child has given him fourteen years of 24/7 education and behavior management practice.

“Mr. Childers is a man with passion, a man with heart,” says Huntsville High Principal Aaron King, “every day I walk in his classroom I see him doing magic with his students.”  As a self-contained teacher, students spend their entire day with Mr. Childers.  Mr. King says, “He is their caretaker, he’s their teacher, he’s a lot of things for them – he wears many hats.”  As a result, Mr. Childers builds very close relationships with the students and their families as well, which help to push his students to places they might not have known they could get.

His classroom includes the typical subjects and lessons that can be found in any classroom, but Mr. Childers also incorporates life skills to help his students succeed outside the school building.  Sometimes that means taking his students to the grocery store to practice math.  He says it’s just about trying to do “anything to get them engaged.”  He adds that the biggest reward he receives is when he gets to see a student accomplish something on their own, especially if they weren’t sure they could do it.  “I like to think I just build on their confidence,” he says.

Mr. Childers is an avid Star Trek and Dr. Who fan who he enjoys reading the books and attending conventions whenever he is able.  He points out that Star Trek has had multiple characters that were on the autism spectrum, even if it wasn’t stated outright, and so he wants to bring the series and its themes into his classroom soon.  He and his family also enjoy going on vacations, and he says they always turn it into an adventure that often takes them places they hadn’t intended.  He says, “I’m a back roads kind of guy.”

Mr. Childers lets his students know they are welcome to come back to him for help even after they graduate, and several former students have taken him up on that.  He helps them build the confidence to be independent within their individual abilities, but also focuses on building important relationships that will last for years.  That sort of support system is crucial in the lives of many of his students.  As Principal King puts it, “He is a changemaker here at Huntsville High School.”

Teachers selected as an HCS Changemaker receive gifts from SchoolCraft.