Congratulations to Mrs. Amy Bergeson and Mrs. Jeanne Hendricks, English for Speakers of Other Languages (ESOL) teachers at McDonnell Elementary School, who have both been selected as HCS Changemakers! 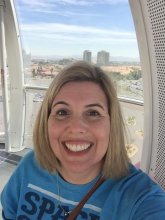 As the young daughter of a father in the armed forces, Mrs. Amy Bergeson set her sights on joining the Navy, flying F-14 fighter jets, and eventually joining the space program.  In high school her thinking shifted, and she started examining the possibility of becoming a sports broadcaster.  She even enrolled in college with that in mind.  While attending a cousin’s wedding, however, she noticed a small child with Down syndrome and had a sudden epiphany.  Something inside just kept echoing… that’s what you’re supposed to do.  She couldn’t shake the feeling, and upon returning home to California she immediately changed her major to education.  She says, “I haven’t looked back.  This really is what I was supposed to do.”

Mrs. Jeanne Hendricks experienced a somewhat traumatic childhood, having lost both her parents at the age of twelve.  She struggled a lot with believing in herself but says that the teachers in her life really helped to guide her and set her on the right path.  During high school, she took several trips to Mexico and Spain to really immerse herself in the culture and language, and eventually became a Spanish teacher before transitioning to ESOL.  In her words, “Teachers had a huge impact on me, and I wanted to do what they did [for me] for others.”

“They have created such a positive environment at McDonnell Elementary,” says Principal Laura Worshim, “you can just see and feel the positive culture when you walk into their class.”

Mrs. Bergeson and Mrs. Hendricks work as a team to address language, academics, and even the social needs of students and their families.  Part of each day in their classroom includes pulling students that are the newest to the country to work on basic culture and language, but they also work with longer-term students to ensure their academic and social success.  Mrs. Bergeson and Mrs. Hendricks also work collaboratively with general education teachers to ensure that ESOL students can be active participants in all of their classes.

Mrs. Hendricks is a grandmother with three grandkids and three adult daughters who are all married now.  She spends as much time as she can with her family, though she and her husband like to take advantage of being empty nesters by travelling and experiencing life in the South, having only lived in Alabama for five years.

Mrs. Bergeson is married and has two teenage boys who are both very active in the boy scouts.  As a family, they enjoy travelling and spending lots of time outdoors.  At least a couple times a year they try to return to Virginia to see her parents.  She also serves as the children and youth director at her church.

Both members of this phenomenal teaching team want the best for their students, and want them all to know they are important, cared for, and loved.  They work hard to show them that language doesn’t have to prevent them from accomplishing their goals, and in fact it can give them an edge because they will never lose that first or second language.  Mrs. Bergeson and Mrs. Hendricks don’t just teach students to be lifelong learners, they teach them to be advocates for themselves, and that is sure to have a profoundly positive impact on each and every student they serve.

Teachers selected as an HCS Changemaker receive gifts from SchoolCraft.