HCS Principal A Finalist for National Distinguished Principal of Alabama

Blossomwood Elementary Principal Dr. Bradley Scott has been selected as a 2020 National Distinguished Principal Finalist for the state of Alabama.  Dr. Scott is one of only three finalists in the state, alongside Dil Uswatte at Rocky Ridge Elementary in Hoover and Bonnie Sullivan at Wetumpka Elementary in Elmore County.  He has been serving in Huntsville City Schools for 24 years, 15 of which has been as a school principal. 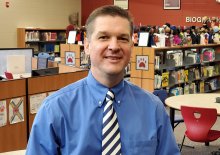 The National Distinguished Principals (NDP) program was established in 1982 to recognize elementary and middle level principals who set high standards for instruction, student achievement, character, and climate for the students, families, and staff in their learning communities.  Each year, the program selects one principal from each state to recognize as a distinguished principal.

Dr. Scott has also been previously selected as a Distinguished Principal Nominee for the Council for Leaders in Alabama Schools (CLAS), District 10, and received the Outstanding Principal Award while serving at Goldsmith-Schiffman Elementary.  He has served on the HCS Safe Schools Task Force, the Alabama Governor’s Commission on Quality Teaching, the Alabama Renaissance Technology Academy, the Huntsville Association of Supervisors and Administrators (HASA), and the Alabama Association of Elementary Supervisors & Administrators (AAESA).

Dr scott With Kids in Classroom.jpg 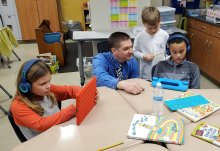 While principal at Whitesburg P-8, he also wrote a grant that made the school one of only fifty schools in the United States to partner with Google and Digital Learning for the Dynamic Learning Project, which provided a technology coach/teacher for the faculty and staff there for two years.

Dr. Scott tries to focus on positivity and a sense of hope in the school climate he builds.  He says, “Each day my goal is to provide hope for each of our students that I believe in them, that what he/she thinks matters, and that they control their future.”  His colleagues and supervisors tend to refer to him as “The Fixer,” as he often goes into a school that is dealing with significant challenges and makes very positive changes.  He says he lives by the quote, “Nothing great was ever achieved without enthusiasm.”

Dr Scott With Kids in Cafeteria.jpg

While there is plenty of evidence of the profound impact Dr. Scott has had on the schools he has served at as principal, he is also quick to point out that he has been blessed with amazing team members.  “Everyone’s working together,” he states, “pulling in the same direction.  This is about all of us in Huntsville City Schools.”

The announcement of the final selection for Alabama’s National Distinguished Principal is expected sometime in late February.