In an unprecedented turn of events at last night’s Scripps National Spelling Bee in Washington, D.C., eighth-grade Mt. Gap student Erin Howard became one of eight co-champions after twenty grueling rounds of spelling.  This year marks Erin’s fourth trip to Washington for the competition, having progressed to the nationals each year since 2016.

After whittling the hundreds of contestants down to a group of eight during the closing finals last night, the judges and pronouncer Dr. Jacques A. Bailly seemed unable to stump the remaining spellers.  “We’re throwing the dictionary at you, and you’re showing the dictionary who’s boss,” said Bailly at the end of the 17th round.  “We are now in uncharted territory,” he continued, “We do have plenty of words remaining on our list, but we’ll soon run out of words that will possibly challenge you, the most phenomenal assemblage of super-spellers in the history of this competition.”

In a historic change to the bee’s rules, Dr. Bailly then declared that any speller remaining after the 20th round would be declared a co-champion.

The anticipation and tension of knowing the championship was just a few words away was palpable on the spellers faces.  After a long day of spelling, over three hours of which were spent in the final conclusion aired on national television, each of the eight weary spellers approached the microphone and spelled their final three words correctly.  The Scripps National Spelling be is now calling them the “octochamps.”

Erin breezed through almost every word right up until the end.  As she approached the microphone in the 20th and final round, she simply stated that “It’s great to be here.”  Dr. Bailly announced her word, erysipelas, and Erin immediately broke into a brief dance.  It was clear that she knew the word, but in following with her established routine she asked for the definition.  “Please, I beg of you,” she added.

Commentators at the competition at one point stated that Erin made for a “fantastic speller, but not much of a poker player,” noting that she rarely hid her emotional state while on the stage.

Erin has progressed to the top 10 in each of the past two years. She is now the first champion Alabama has had in 45 years, and is preceded by only one other Alabama student, Julie Junkin of Pickens County, who won in 1974.  In 1969, Margeret Matthees, a student at Westlawn Junior High School in Huntsville, finished in second place.

Erin Walking Away from Mic at 2019 Scripps Spelling Bee.jpg

Above photos and those in-line above courtesy the Scripps National Spelling Bee.

Erin and Teachers from Mt Gap at National Bee.jpg 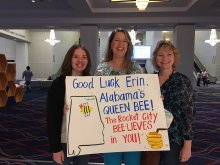 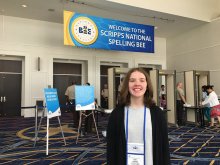 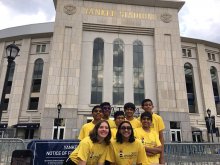 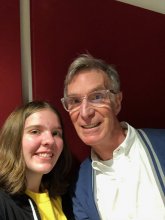 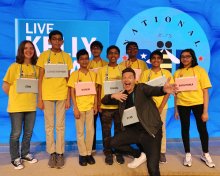 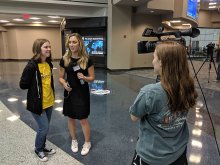 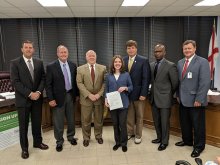 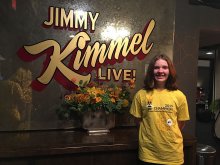 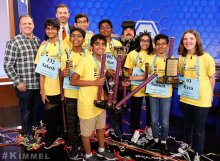